* In case of any delay in receiving the OTP, you may verify it later. Please proceed without verification.

Enter your City name or Pincode

Ichapuram is a small town located in the Srikakulam district of the Indian state of Andhra Pradesh. Ichapuram is a municipality and also happens to be the mandal headquarters of Ichapuram mandal. It is located nearly 142 km from the district capital srikakulam. As per the 2011 census, this town had a population of 36,493 with 17,716 males, 18,777 females and 4,004 children. The average literacy rate was 71.12% with 23,105 literates. Both both Telugu and Odiya are spoken here. Ichapuram is an assembly constituency in Andhra Pradesh. 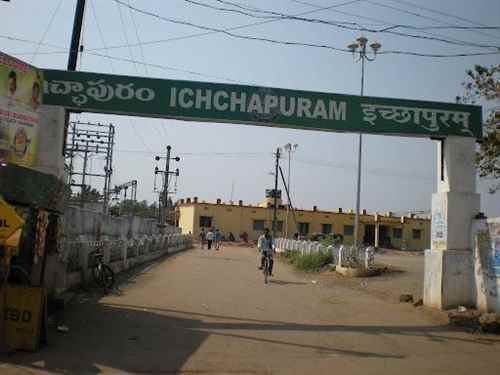 Ichchapuram is situated right at the border of Andhra Pradesh and Odisha at 19.12°N 84.7°E. The average elevation level of this town is about 7 metres (22 feet) and is located on the banks of Bahuda river.

It was in the Nawab's tenure that Sri Swechchavati Ammavaru was considered the deity of this village. And it was after whom that the town was named as Swecchapuram. However as time passed, the place became known as Ichapuram. At an average elevation of 7 m above sea level, this is also referred to as ‘Mini India’. There are many people belonging to many of the religions of India who are living here in harmony. The town is also popular as the biggest trans-shipment area. At the border of the two states, many transport agencies have been established since 1950.

There are a lot of beautiful places to see here and one of the includes Peerla Hill, which is basically a historical place. It also happens to be the main attraction in this town. It is in the month of Kaartikam and Margasiram that hundreds of people conduct Peerlotsavas on every Thursday. The ritual is a rather unique one where the people of the Muslim community also serve as archakas or priests. They participate in these utsavas as devotees and it shows that communal harmony that is maintained here.

One of the other major attractions of this town is the Bahuda River. This river is known to have originated from Goniya Bosa Hills in Orissa and flows through the town and other villages of this mandal. It finally merges with the Bay of Bengal at the end.

Jagannath temple at Ichchapuram is another popular attraction here too. It is a very old temple that worships the Lord Jagannath and is done up in classic architecture that is very common in this part of the country.

There are a lot of shopping attractions in this town. Along with malls there are many standalone shops here that offer you with a blend of local produce and goods too. In particular there are a lot of cotton and textile stores around. Other major attraction is the mall which include-

Comments / Discussion Board - About Ichapuram